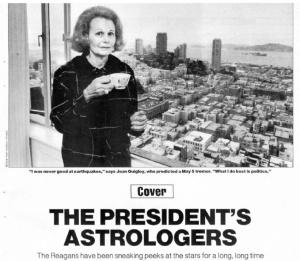 You may remember that Nancy Reagan’s interest in astrology was largely verified in 1990 by astrologer Joan Quigley, in her tell-all book What Does Joan Say? and then covered by Time Magazine.  Nancy Reagan was “outed” by Ronald Reagan’s chief of staff, Donald Regan, who started working for the President in 1985, but notoriously feuded with her.  When he resigned in 1987, Regan wrote a tell-all book about his experience that mentioned Quigley’s role in the White House and Nancy Reagan’s reliance on her. This 1988 People Magazine article discusses the media frenzy that resulted.  And, here is Joan Quigley speaking for herself so you can see her perspective:

Of course, it’s impossible to know whether to take Quigley at her word in terms of her influence on Nancy Reagan and the President, but you have to assume that some of her advice was followed.

So, in this context, in 1998 the Gallup poll asked three questions about this topic:

Interestingly, when asked in conjunction with this prompt about Nancy, only 12% of respondents said that they believe in astrology.  Perhaps a concrete example makes the larger group of Americans who purport to believe (25-30%) in astrology to rethink their response.

Only 1% of respondents said that Nancy Reagan’s interest in astrology improved their favorable view of the President, while 17% said it made them view him less favorably.  Finally, 19% said that it had made them think differently about Ronald Reagan and his presidency.

A CBS News/New York Times Poll (May 1988) asked in a similar vein:  Do you think President Reagan should use horoscopes or astrology to help him make government policy decisions?  81% of those polled said that the President should not, and only a small percentage of folks (6%) said yes, or it depends (6%).  I would like to meet those 6% of folks who said “yes.”

It seems like most Americans consult astrology or are familiar with it, and “believe” in it in the most general ways.  But when asked to apply it to their own lives or to something like government decisions, people’s tendency to believe in it gets diluted.  This confirms my suspicion that the 25% of Americans who believe in astrology, don’t entirely know what they are believing in or that belief is somewhat lukewarm.  That doesn’t mean that they aren’t susceptible to greater understanding, but it may be the case that people aren’t thinking very hard beyond sun sign astrology and magazine horoscopes to something more sophisticated.

It is rare that I run into someone who doesn’t read his or her horoscope, or at least give a passing glance to it.  It may be the company that I am keeping these days, but the statistics say otherwise.  It’s actually a fact that millions of Americans regularly consult astrology for insights about their lives.  One compelling thing that happened during the big story of 2011 about Ophiuchus going viral is that it reminded me that millions of Americans actually “believe” in astrology and read their horoscopes.  Astrology does have a lot of currency with a hell of a lot of folks.

There is a recent article that I recommend which summarizes American’s views on astrology and other cosmic topics, Eric Weiner’s December 2011 story in the Los Angeles Times.  As the piece points out, the major public polling organizations like the Pew Research Center and Gallup have been asking about people’s beliefs in astrology for decades, so we actually know a bit about people’s opinions in this area.  They have been asking:

Do you believe in astrology, or that the positions of the stars and planets can affect people’s lives?

In 2012, Pew sampled more than 3,000 people by phone, and 30% of Americans agreed with this statement.  In 2009, 25% agreed.  That represents millions of Americans, and these numbers have been verified by polling from other outlets.

The 2009 Pew study is interesting for a number of reasons, that I will summarize here.  You might wonder—who are these 25% of people who believe in astrology?  What is their profile?  To begin, the Pew study tells us that they skew younger; in fact, the younger a person is, they more likely they are to believe; 18-24 year-olds believe (32%) and 65+ believe to a much lesser degree (18%).  They also tend to be less formally educated; in fact, the more formal education people have the less they tend to be believers.  Likewise, they tend to be more liberal (30%) than conservative (18%) and to be poorer (32% of those making under $30,000 a year) than wealthier (16% of those making over $75,000 per year).  Democrats outnumbered Republicans 2 to 1.  There were more believers on the West Coast (29%) versus the South (22%), but there was not huge variation in the four major regions of the country.

There were a couple of surprises for me, though.  My own suspicion was that the percentage of women who suscribe to astrology would be much higher than men, but it is only modestly so; 28% of women versus 21% of men.   A more startling fact was that while 22% of believers were self-identified as Caucasian/White, 29% of African-Americans and 35% of Hispanics claimed to be so.

I am fortunate that I work with a number of very talented public opinion researchers, which has given me some modest insight about how all this works.  They also have given me so cues on how to identify some of the best research over the last twenty or so years on this topic, which is admittedly scarce.  Generally you analyze public opinion not only to get a snapshot about the beliefs of a particular group, but also to change or modify it.  From my vantage point, if I were a member of the astrological establishment, I would be using this sizeable audience to identify key opinion leaders and influencers who could help expand the universe of folks that give additional credibility to this art.

Although 25% of Americans believe in astrology, more than 50% regularly read their horoscope or a personal astrology report (2010 General Social Survey) either occasionally or regularly.  So more than half of Americans are aware of astrology, even if less pay active attention to it.  And only 5% actually said that “horoscopes or astrology helped you make decisions about your life” (1988 CBS News/New York Times Poll), so far fewer are either able to make sense of their horoscopes or know how to practically activate themselves around it.

All of this opinion research though still begs the question about what people actually believe in.  Truthfully, I am not sure what these folks think astrology actually is, and I can’t tell you how many folks ask if being psychic and intuitive is the same thing.  These are good questions.  So there is a lot of room to actually influence and shift people’s thinking on this topic.

I am coming out about my interest in astrology, psychics, and all cosmic events, to be featured in The Cosmic Post.  This blog is fueled entirely by my own passion and curiosity, and not by expertise.  I am writing as a student and seeker, and hope you will learn along with me.  If you have comments or can offer a correction to any of my views as you read, I welcome your feedback and to become part of the dialogue.

Here is the inception chart for The Cosmic Post, launched Monday, October 29 at 7:30pm EST from New York City, right in the middle of Hurricane Sandy as it touches down on the East Coast.

I hope over the coming year to aggregate some of the most interesting news and information that emerges in the news cycle, to interview some folks, and recount some of my personal exploration from the field.  If you are like me, sometimes I miss a great article or news coverage, or I find out about an exciting new author or event at a late date.  If you subscribe or follow my blog, hopefully you will get some exciting links and insights on a regular basis.  Welcome!